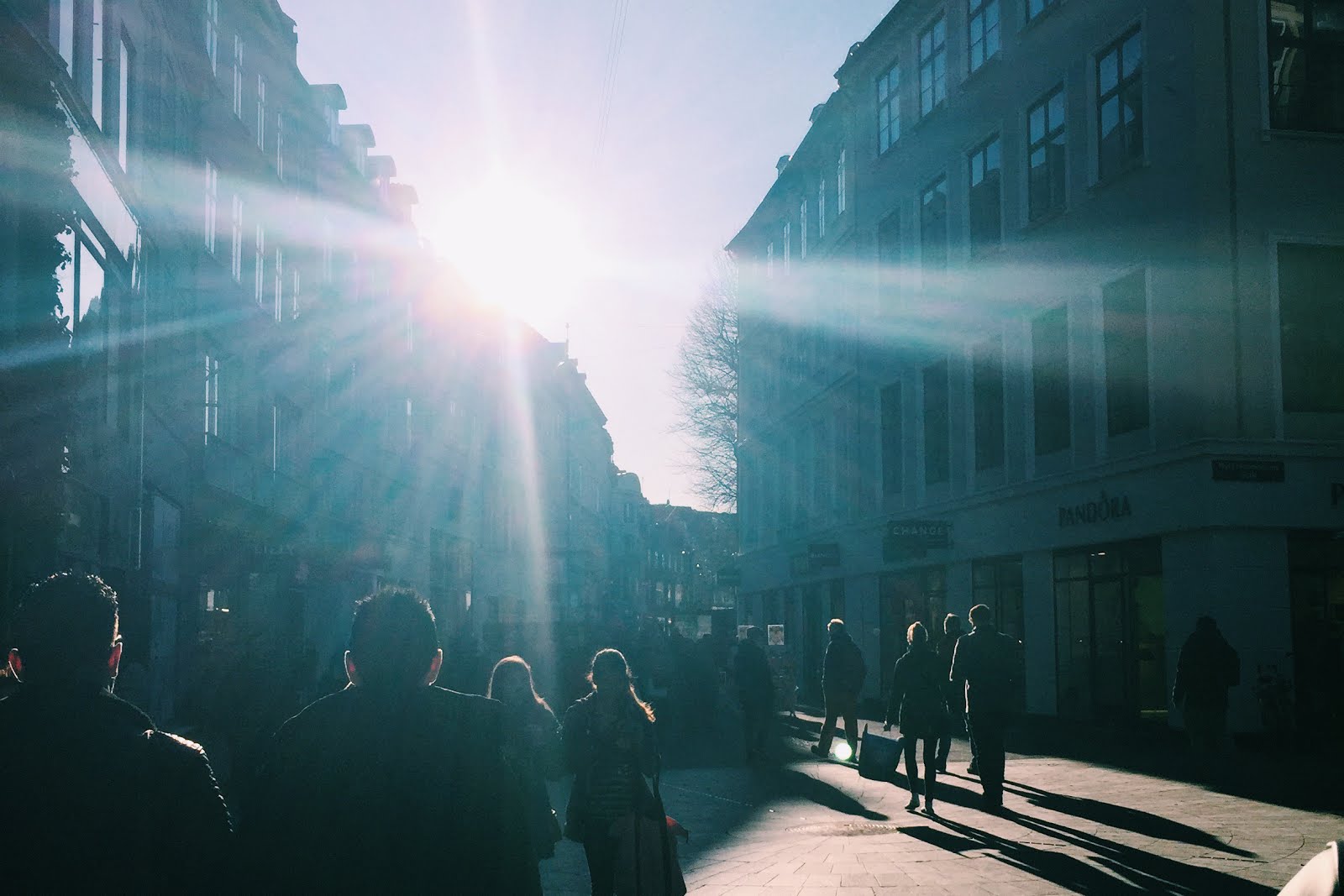 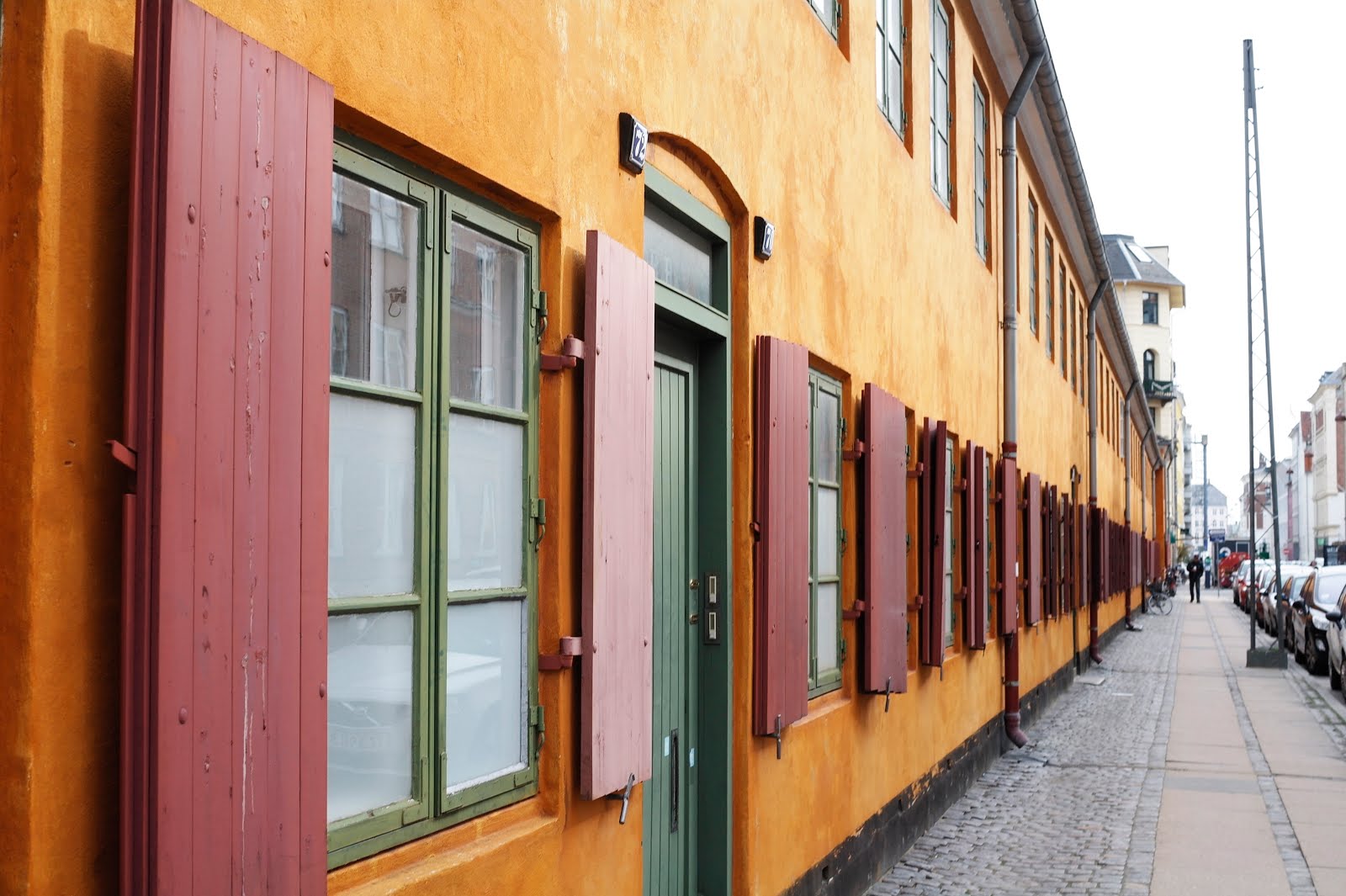 Welcome to my second mini-guide for a weekend break abroad. Get settled in your seat once again – this one’s a little long! I’ve been doing a little catching up lately, as I’ve just come back from my latest adventure in Majorca (which you might’ve caught over on my Instagram), but more on that soon!

Copenhagen was an incredible birthday present from Simon, starting out with a guessing game, including a jigsaw puzzle and one key piece missing. Though my birthday was in February, we were all booked in for a weekend away in April as we waited for it to get a little warmer (yes, this guide is a little late too!).

If you haven’t already been, Copenhagen is beautiful. It’s somewhere you can instantly feel at home, and having spoken to other people who have recently visited, I know I’m not alone in this. Having written this guide and remembered exactly how good it was – and with £50 return flights from London – I’m hoping it’s not too long before we can jet off there again!
Things to do… 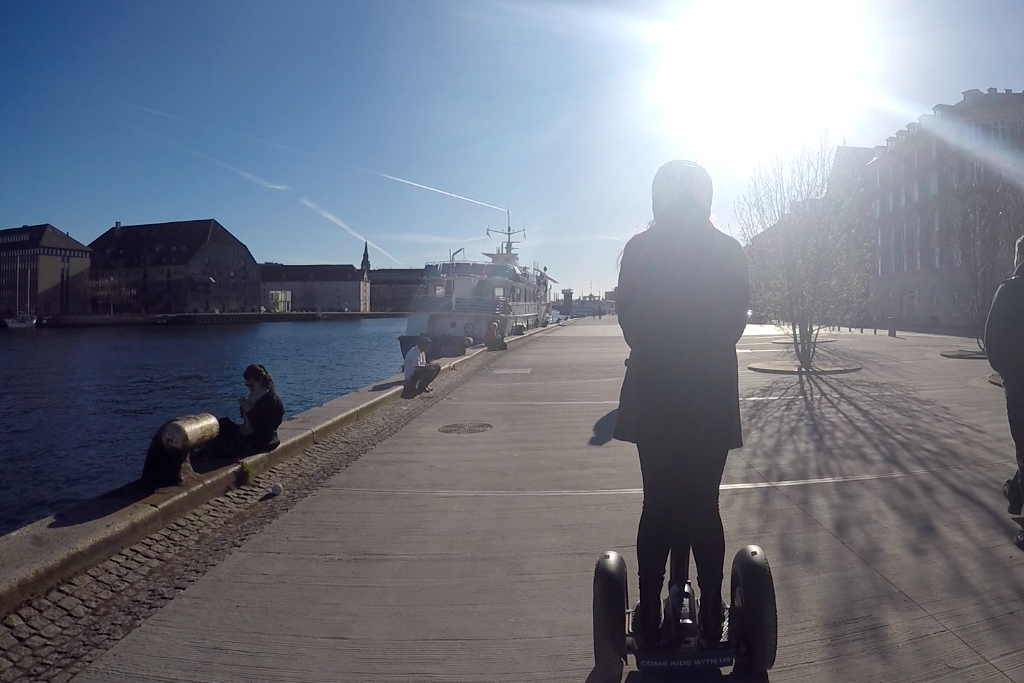 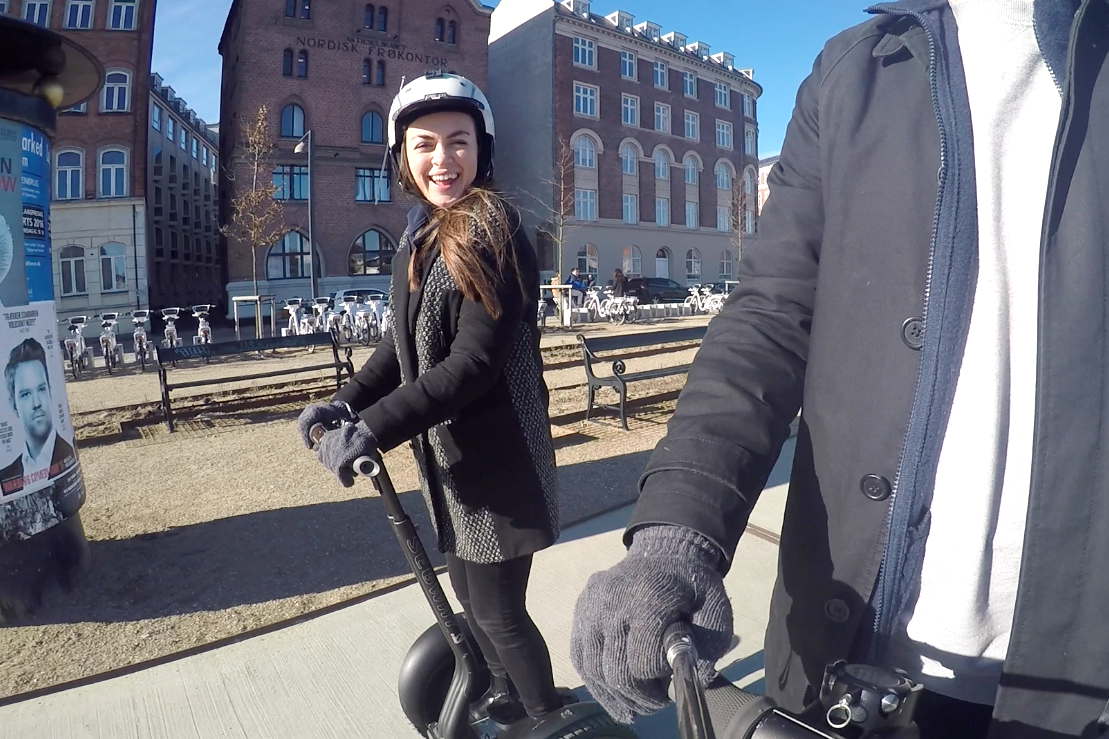 Segways
First up, a major thanks to Simon’s Mum for this one. After originally thinking of kayaking, unfortunately the water was too cold to row when we arrived, so we opted for a segway tour instead (and if I do say so myself, we looked great in a helmet).
We were in a group of five people for our hour long tour, which started with how to use a segway and followed with a tour of the city via segway. This was a great way to start the trip on Friday afternoon, and although I did miss a few interesting facts during the first ten minutes of the tour (I was concentrating on staying upright, okay!), it was actually really interesting as well as exciting, and let us orientate ourselves within the city and plan exactly where we wanted to spend more time. We’re also now officially certified in segway-ing. Pretty cool right? 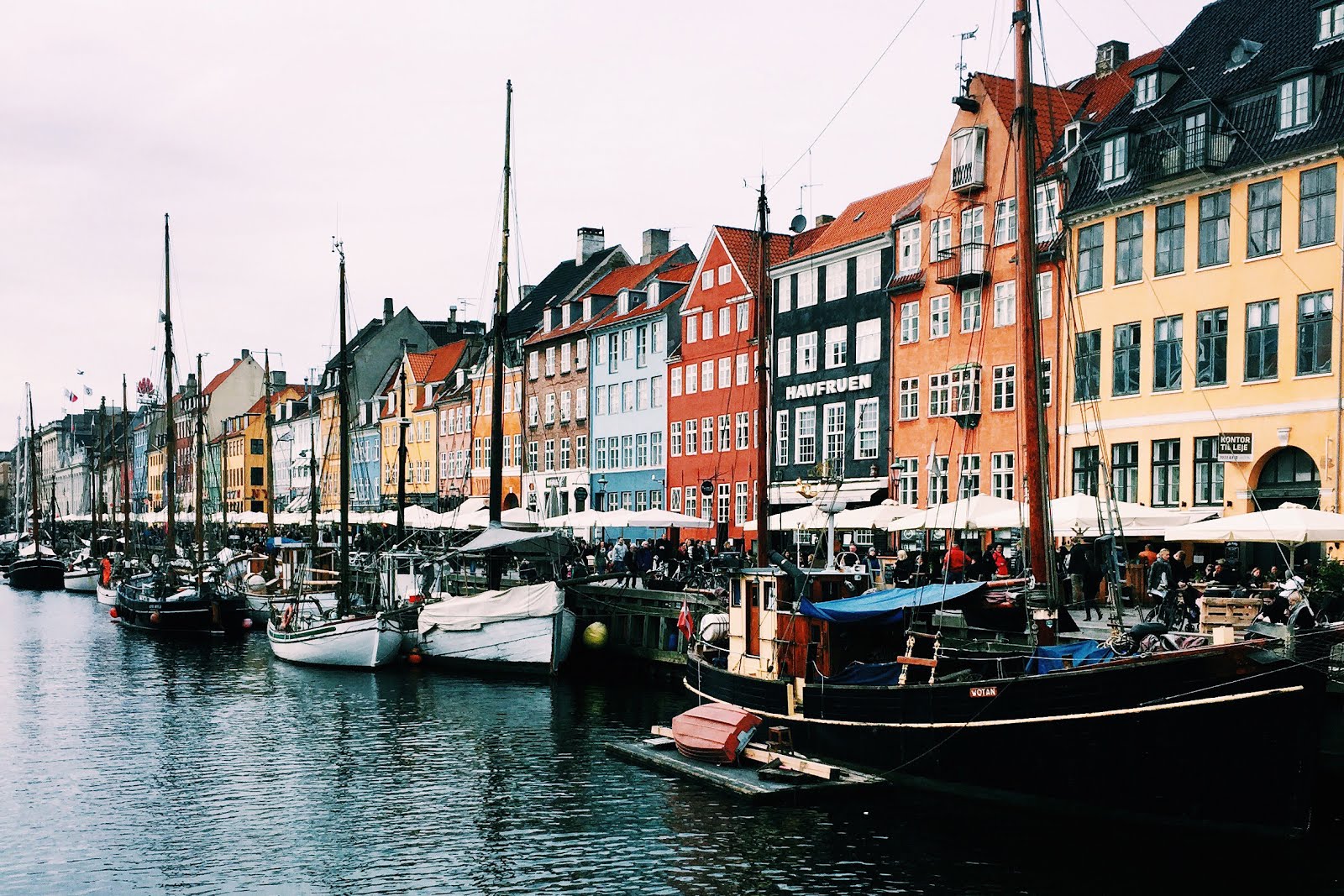 Nyhavn
Our tour guide on the Segways compared this area to Covent Garden – beautiful, but not the cheapest place to drink! We stopped here briefly on our Segway tour, but we walked back on the Sunday to explore a little more for ourselves, and it’s so pretty and lively this is the place I think of when I remember Copenhagen. 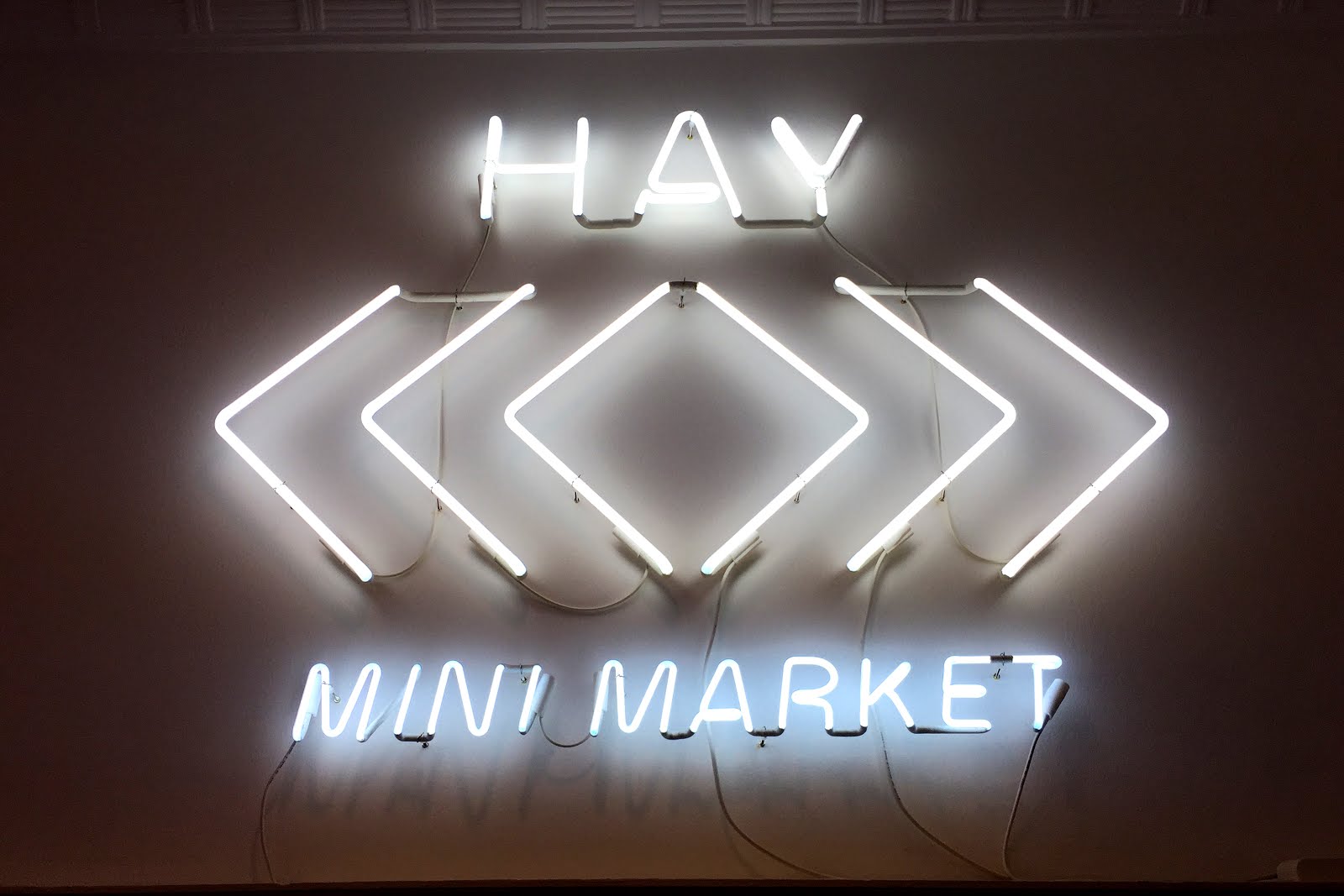 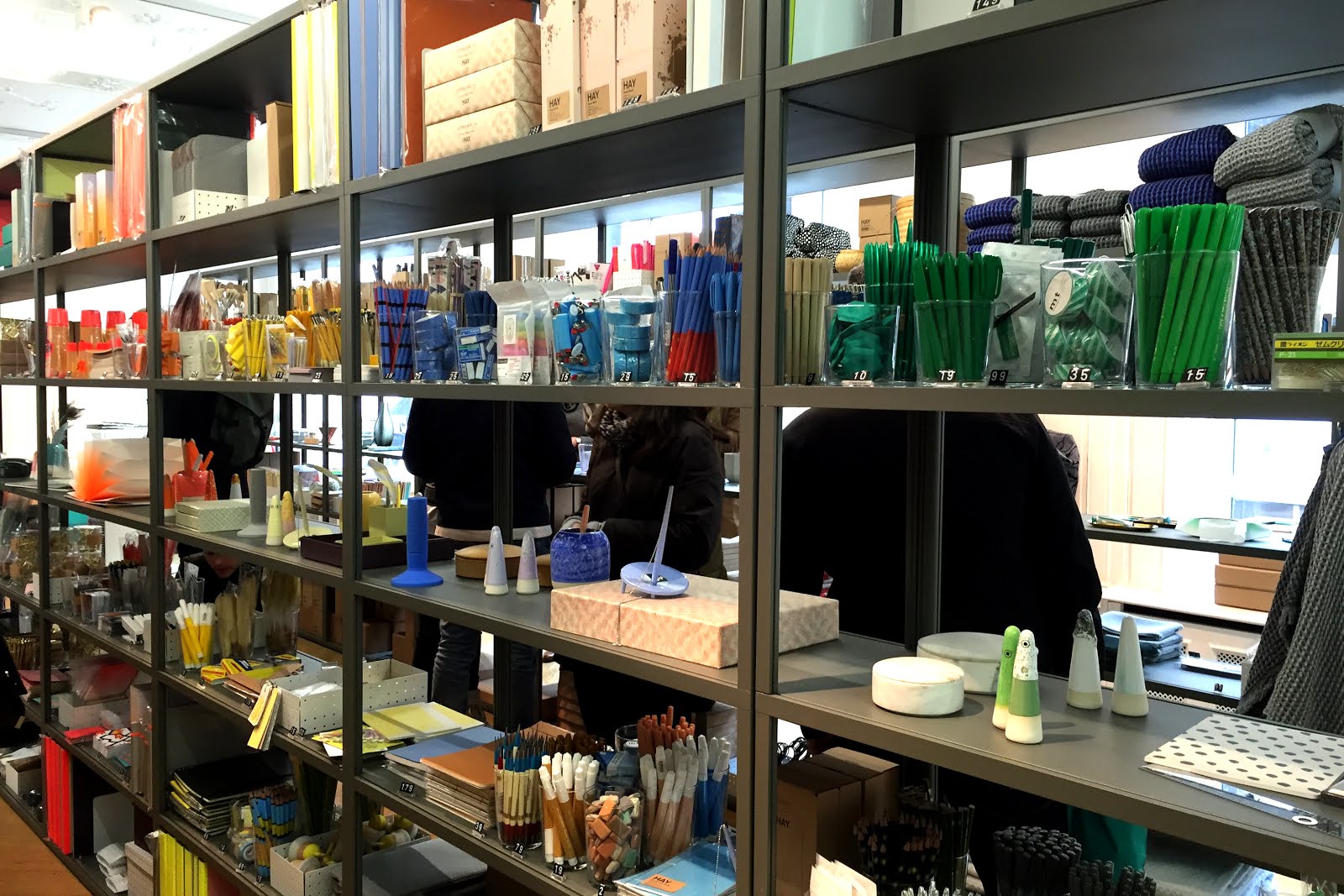 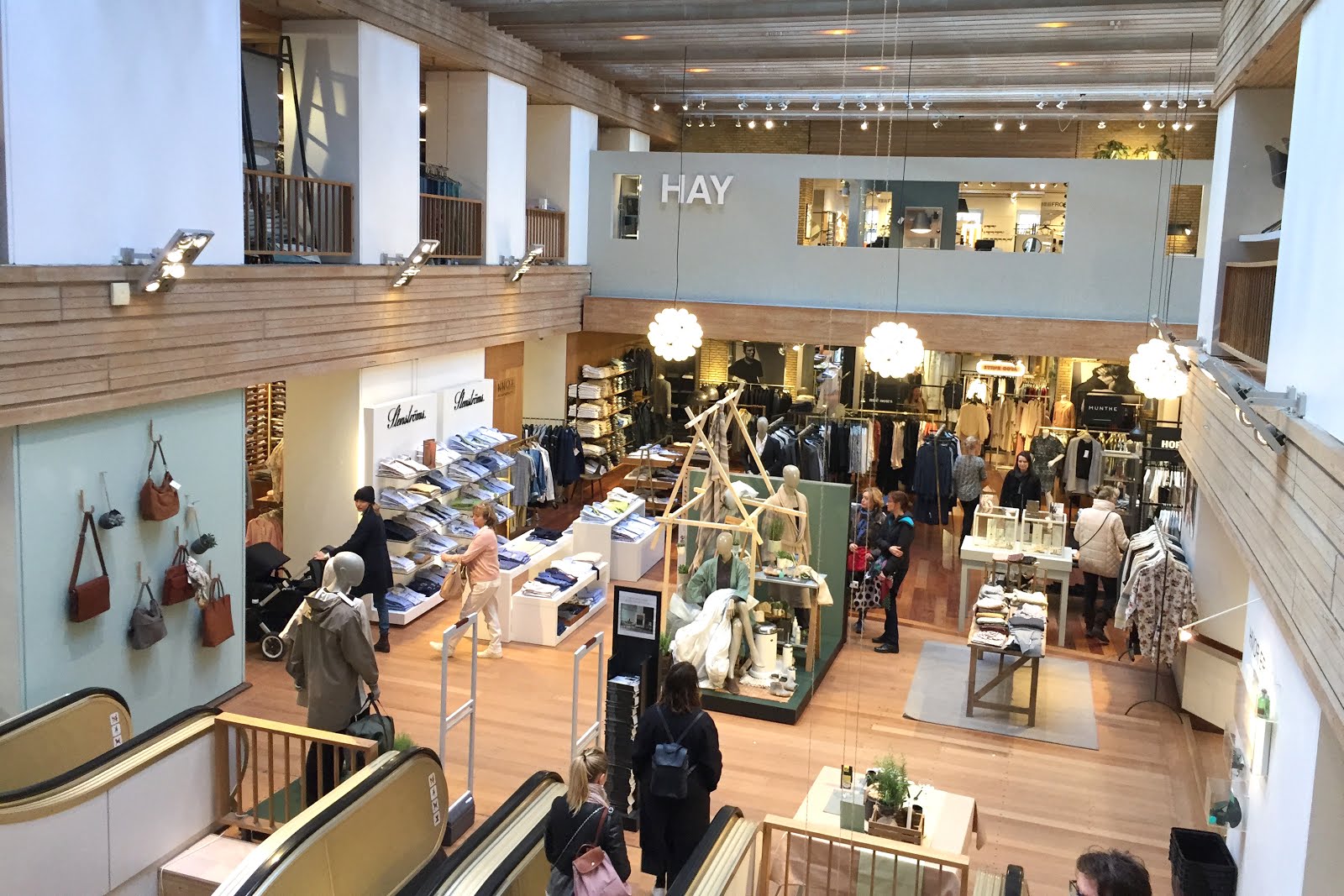 One of the first things we learnt on our Segway tour, was that there are many shops running through the city centre, with it being home to the world’s longest pedestrianised shopping street,Strøget. While wandering round, we stumbled across a lot beautiful Danish design shops, including Hay, which organised stationery in rainbow order and had a million and one useful things you never knew you needed. 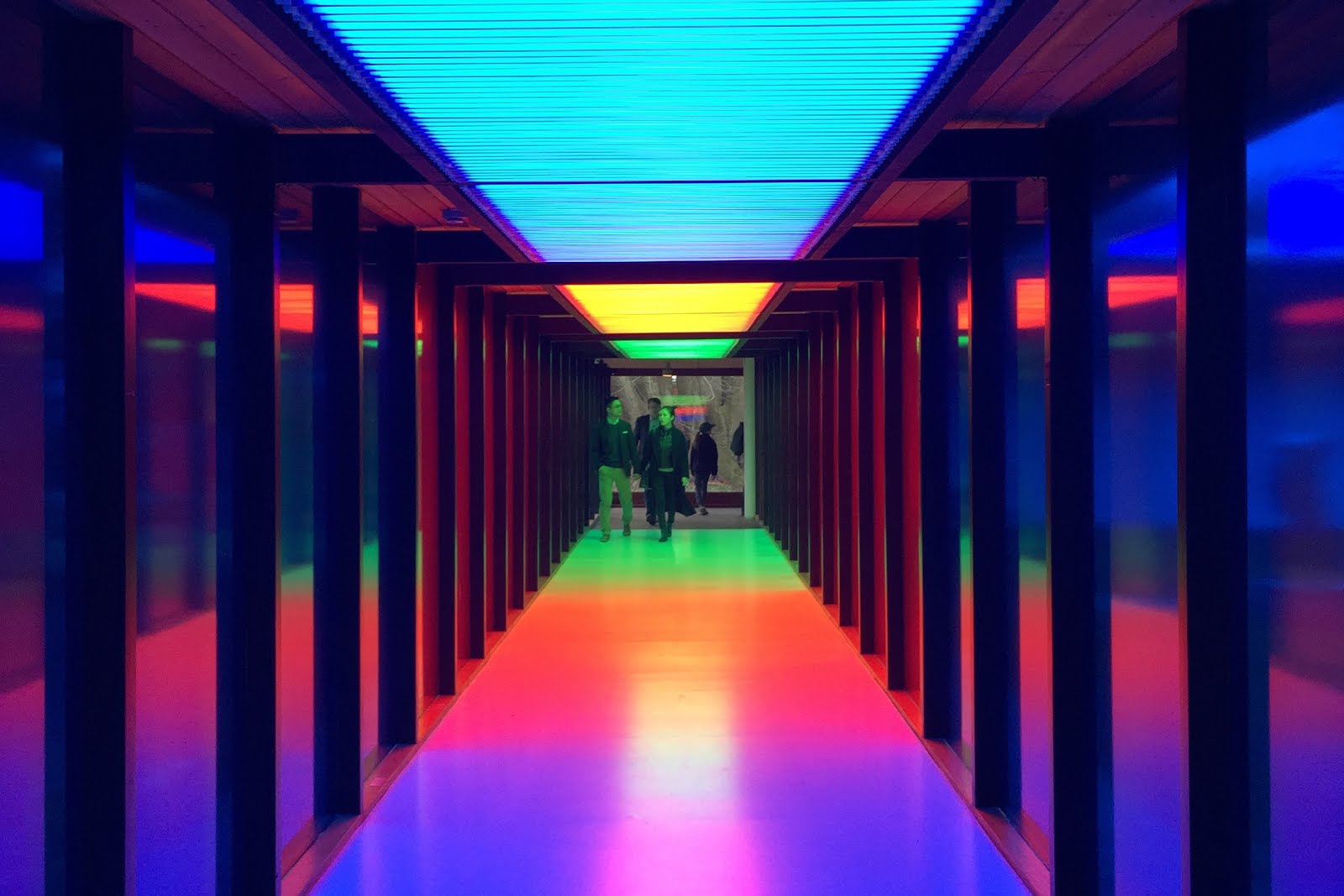 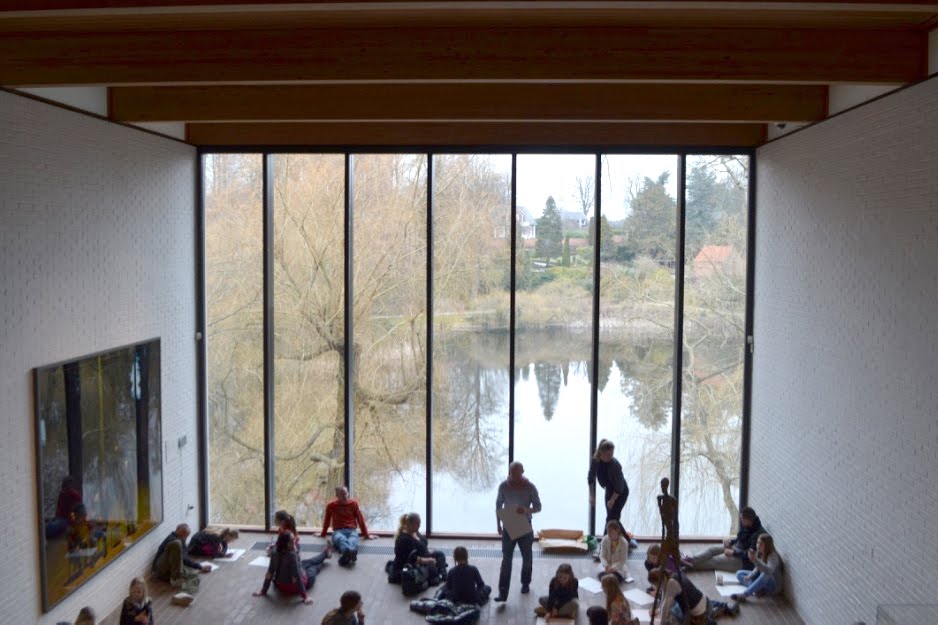 We spent our final Sunday at The Louisiana Museum. The museum is a little bit out of the way, about a half hour train north of Copenhagen. It sits in an unassuming little town, with the entrance to the house only recognisable by the queue out of the door for tickets. The queue didn’t take very long for us (but perhaps the rain put a few people off?), and in we went to explore the exhibitions. The museum is a maze of artwork and sculptures, meaning you can spend hours in here and wandering through the grounds overlooking the sea.

One warning here: if possible, bring your own packed lunch or snacks! It is allowed to sit outside and eat your own food, and while there is a cafe, Simon and I were desperately trying not to convert the money back into pounds as it was pretty expensive. About £9 for a bowl of soup… 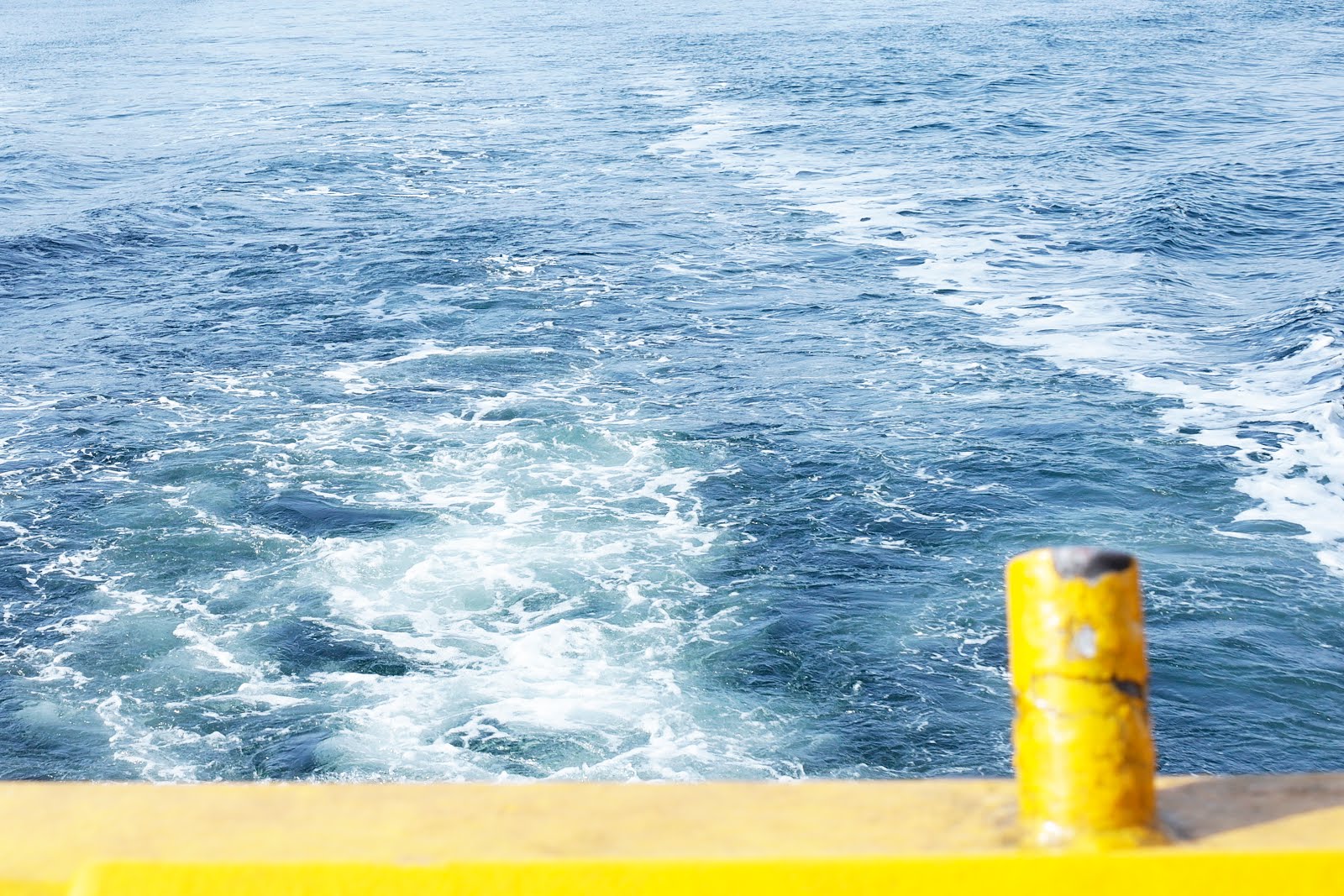 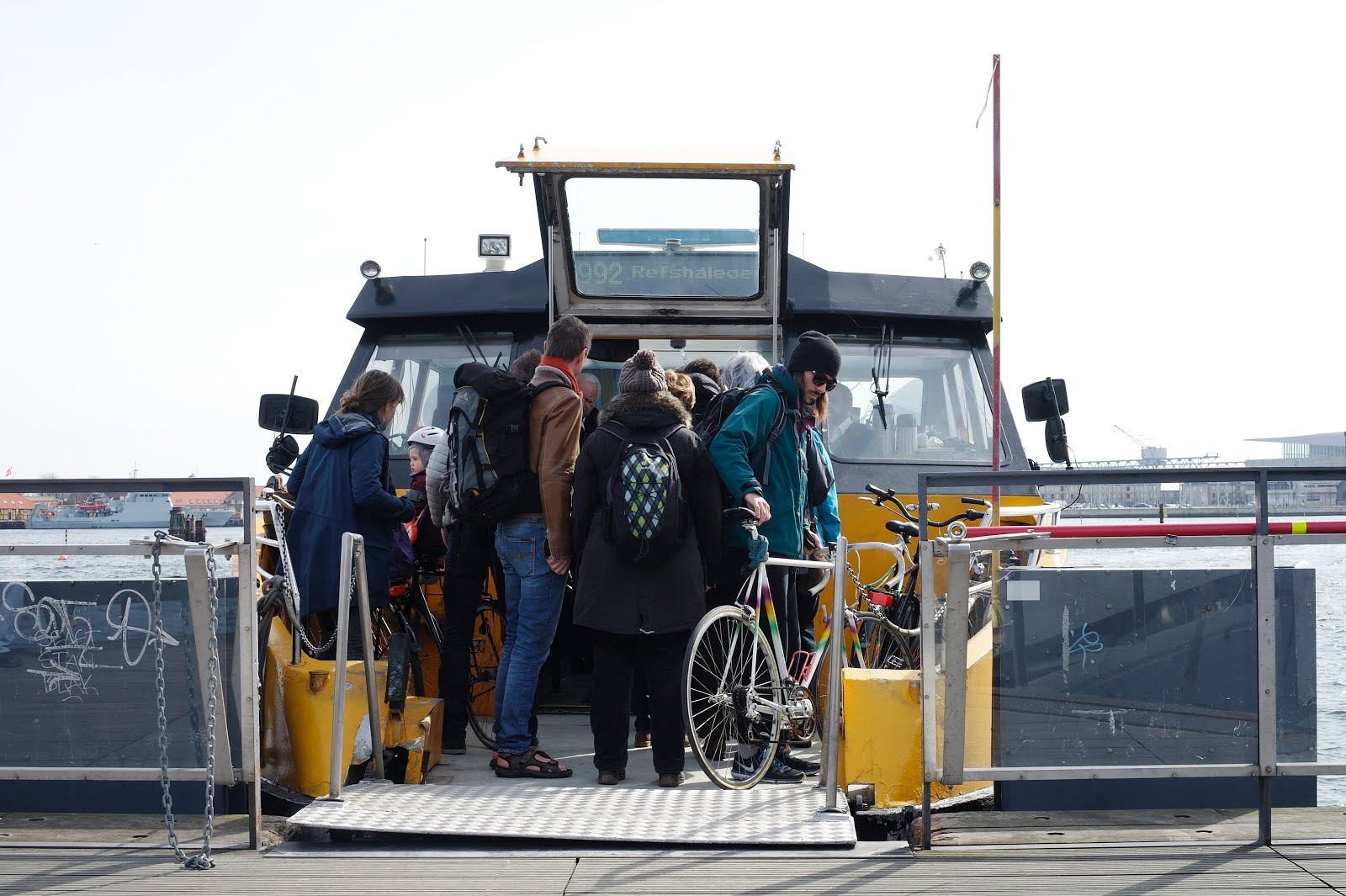 Travel by water taxi
This one happened a little by accident (as all the best things do!). We mapped out our route across the city towards Copenhagen Street Food Market – more on that later – and happened to be just in time for the water taxi across the river. You can sit inside or stand on the back of the boat (and pretend you’re captain!) as you speed across. Not too expensive either.
Places to eat… 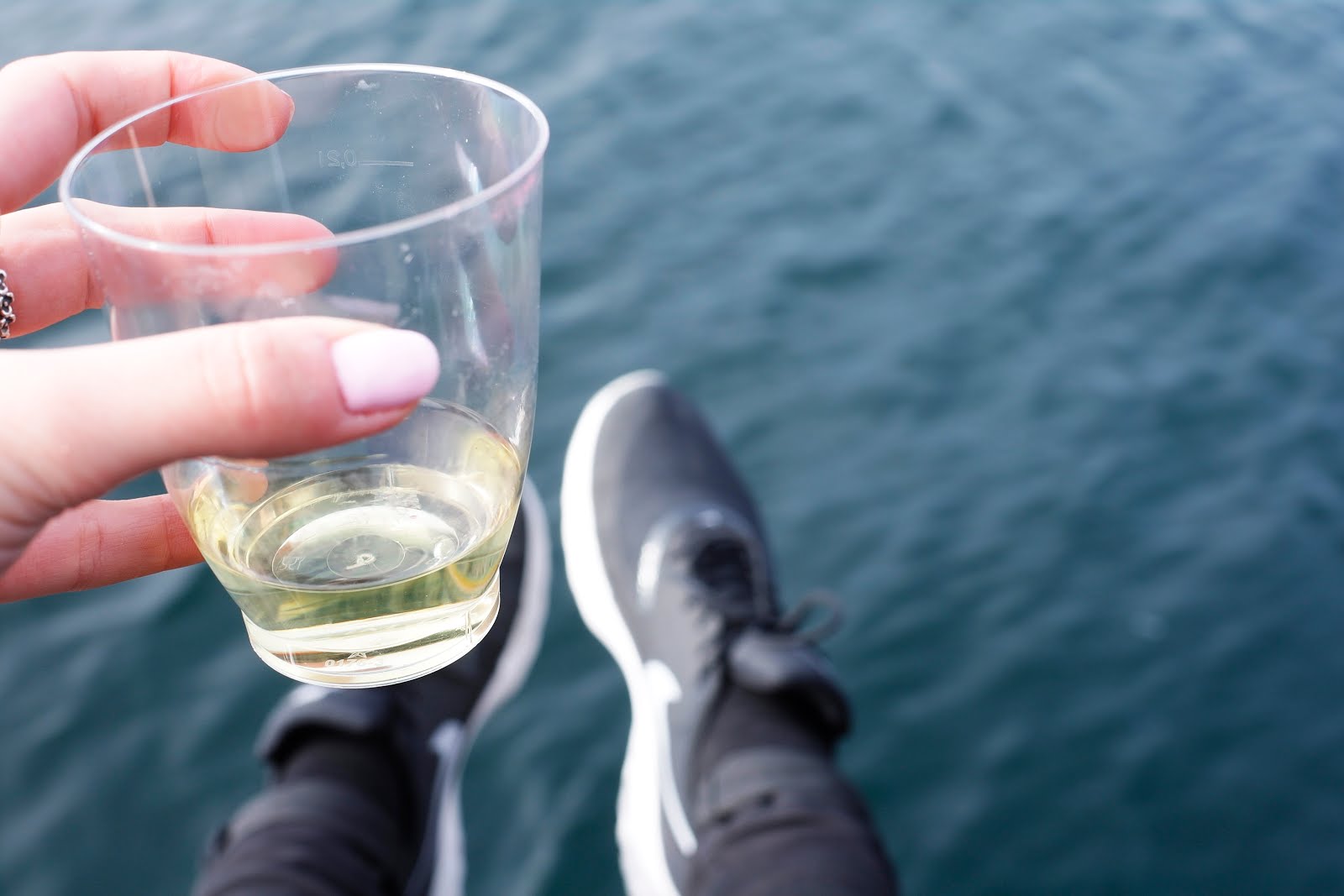 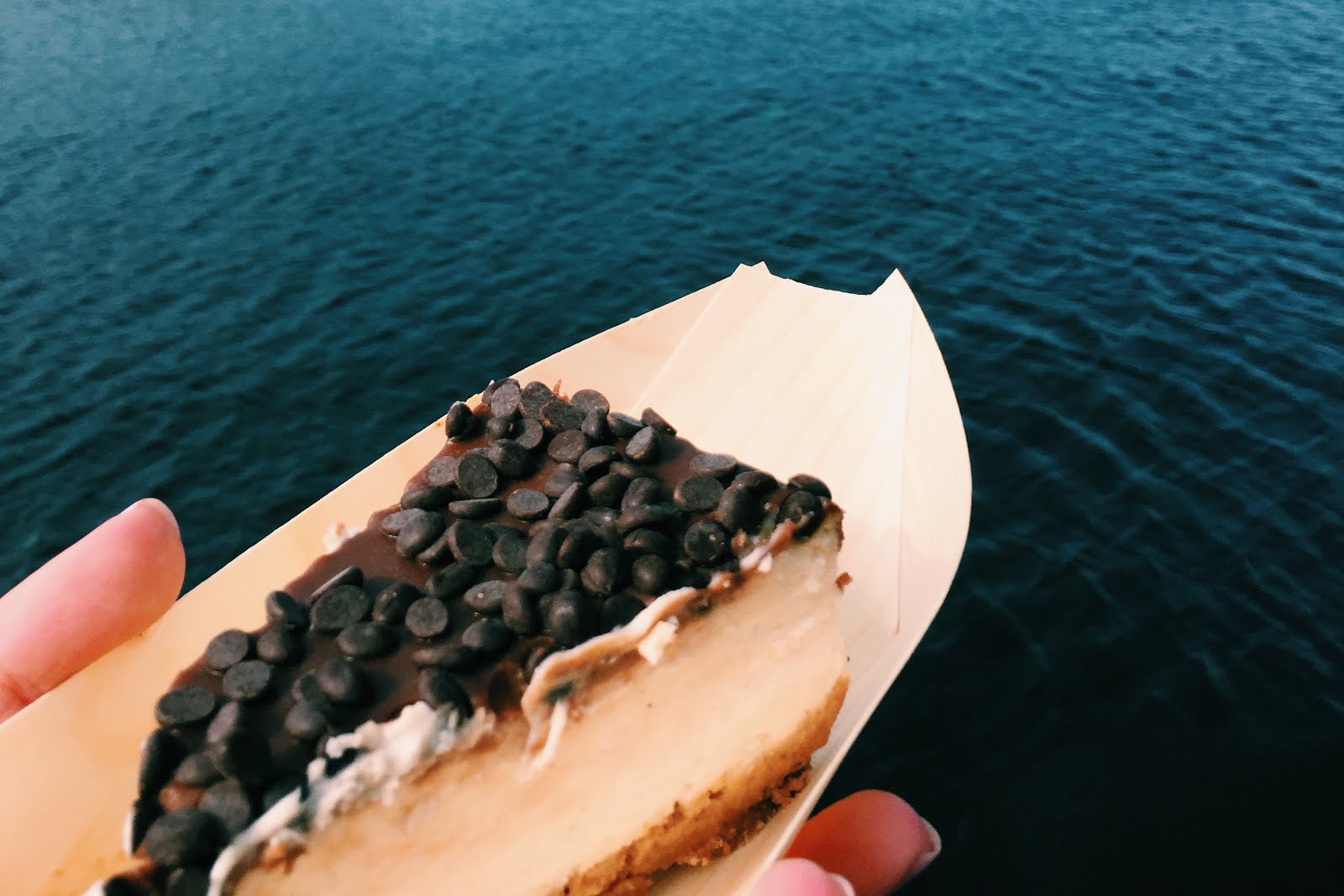 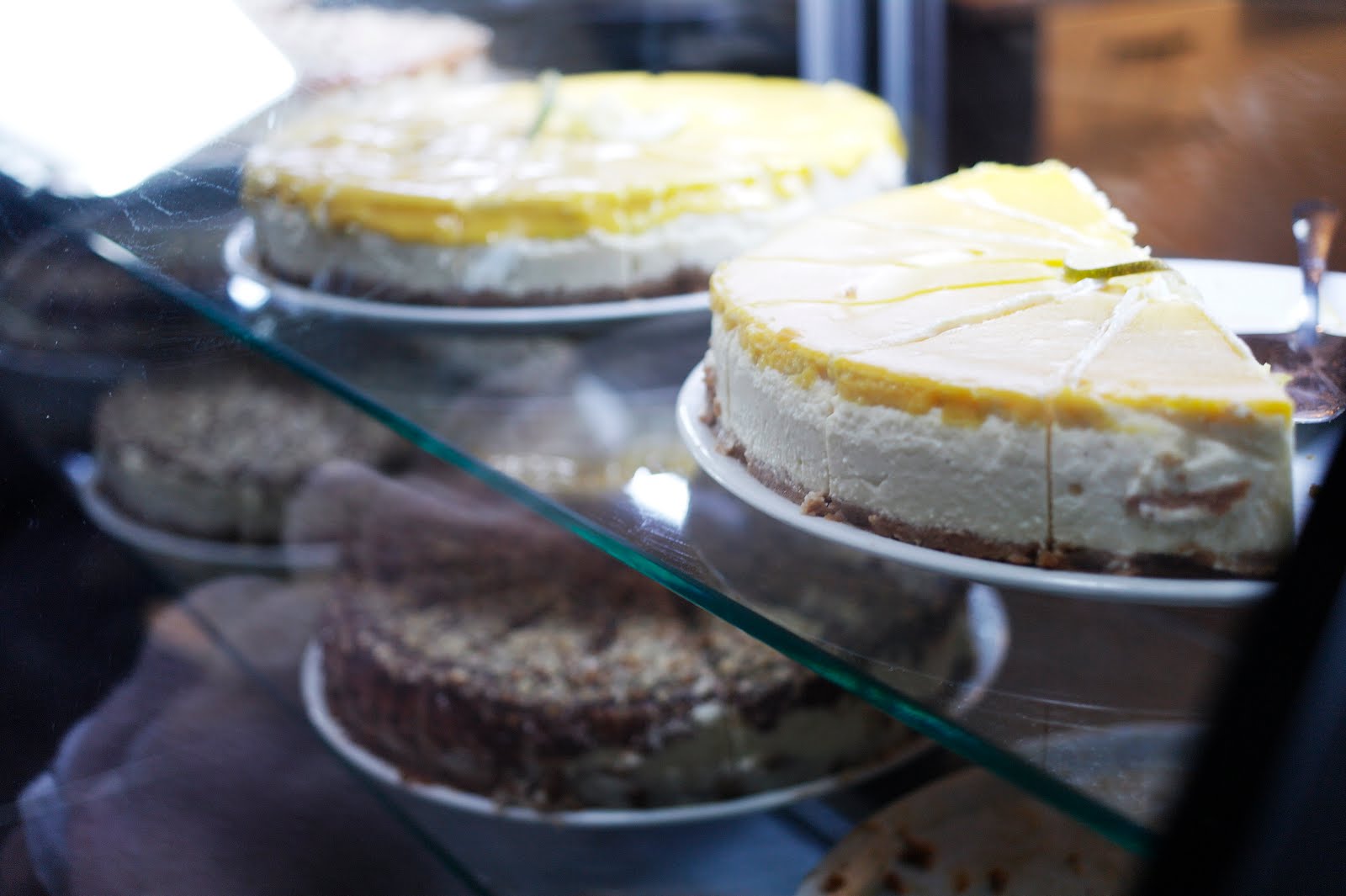 Street Food Market Copenhagen
Top of my food recommendations and also one of my highlights of our trip was the Street Food Market – nothing was better than browsing round for all sorts of food, before taking our choices and a class of wine to sit on the canal in the beautiful sunshine, looking over the river.

Similar to Dinerama and Hawker House in London, this is a giant warehouse converted to house food stalls and bars. With seating both inside and outside, from deck chairs and benches to canalside pavement. We chose duck sandwiches, followed by a giant slice of cheesecake (a slice each of course)- which was definitely the best dessert I had in Copenhagen. The food stalls here also take card which is more than handy! 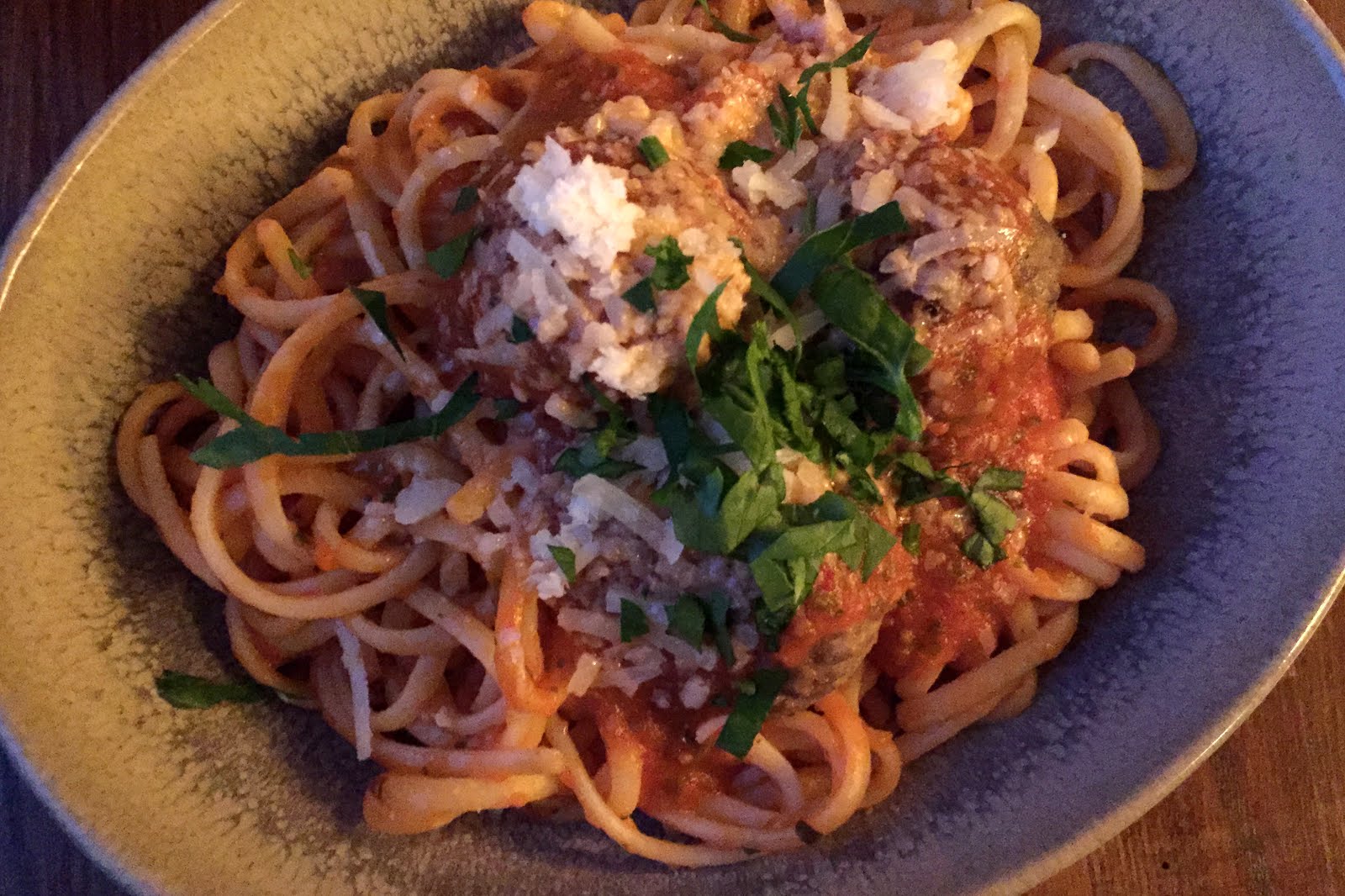 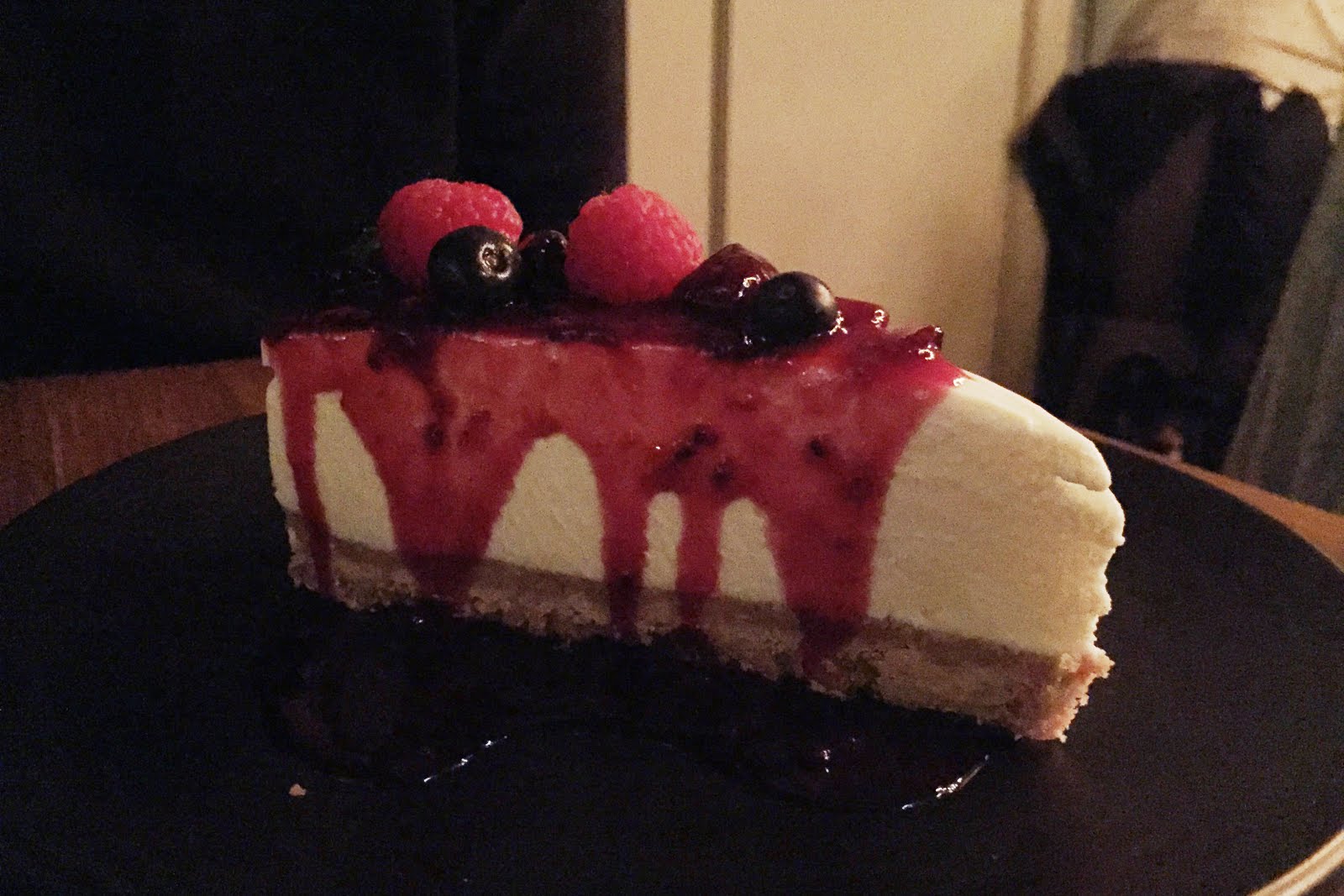 The Union Kitchen
The Union Kitchen was my surprise birthday treat, so I had no idea where we were heading until we set off, but when I found out I got pretty excited! Apparently, both Simon’s work and my Mum recommended The Union Kitchen separately, so we had to take a look in.

There’s an extensive menu of “balls”, from sliders to meatballs and mash, so I had a little trouble deciding. In the end, I chose the spaghetti, and Simon chose the burger sliders, both of which were a fine choice in our eyes. Be warned – come hungry as the spaghetti disk appeared to be never ending (though I did somehow still manage the cheesecake by myself post-spaghetti, ahem). 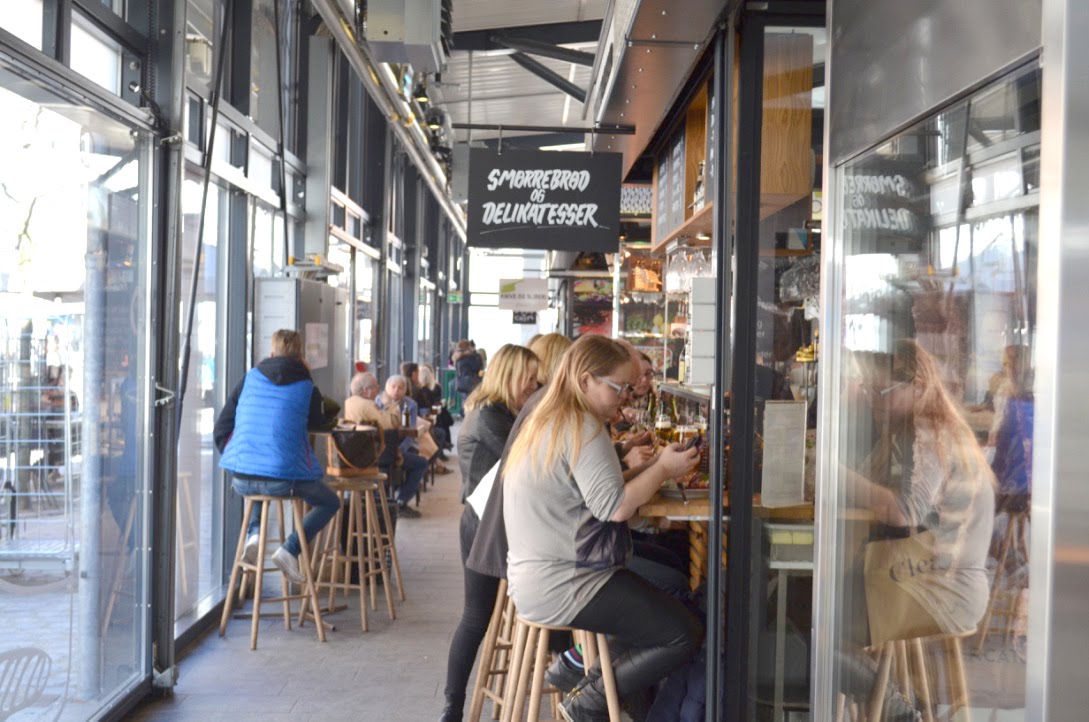 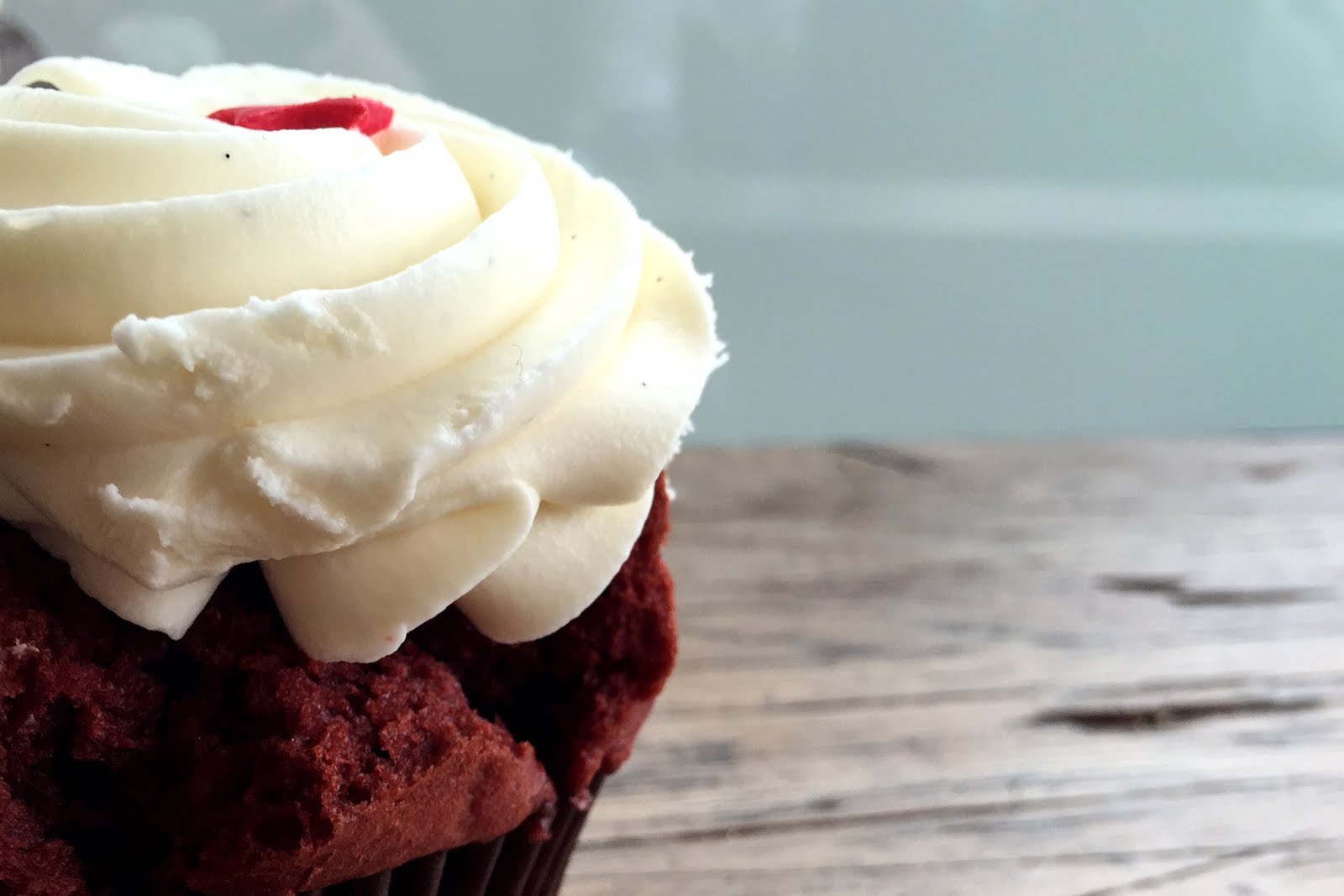 Torvehallerne
Another food market, this one is a little more established than the food stalls at Copenhagen Street Food. There’s a huge selection of dishes, from pizza and smorgasbord to bread and cupcakes. Again, there’s both inside and outside seating, with the inside seating being a part of individual cafes rather than shared tables. We opted for fresh fish and chips here, though one portion would have definitely suited us both just fine for lunch! 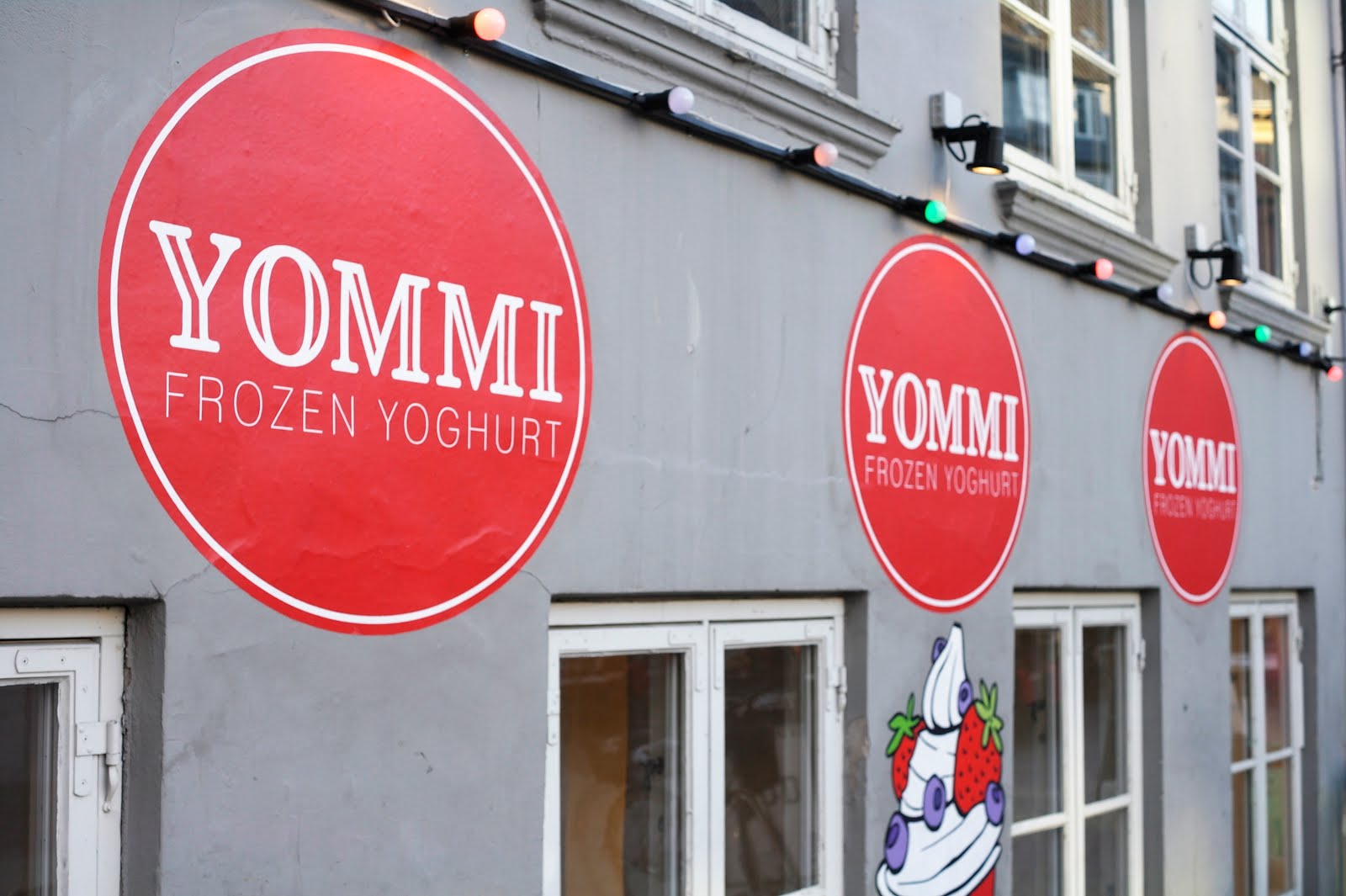 Pick & Mix Froyo
Obviously what I really fancied in early April, with the temperatures at 5 degrees, was a froyo. However, when I saw this little shop at the end of the square I couldn’t help but get overexcited at the help-yourself-machines and pick and mix options. Here you can go in and choose your own ice creams and pour them yourself, mixing and matching as you go. Then, move onto the sweet and fruit section, where you can find everything you could possibly ever want to combine with frozen yoghurt (this is where I went a little crazy…). Top it off with some sauce, and weigh and pay on your way out – voila! Perfect springtime snacking. 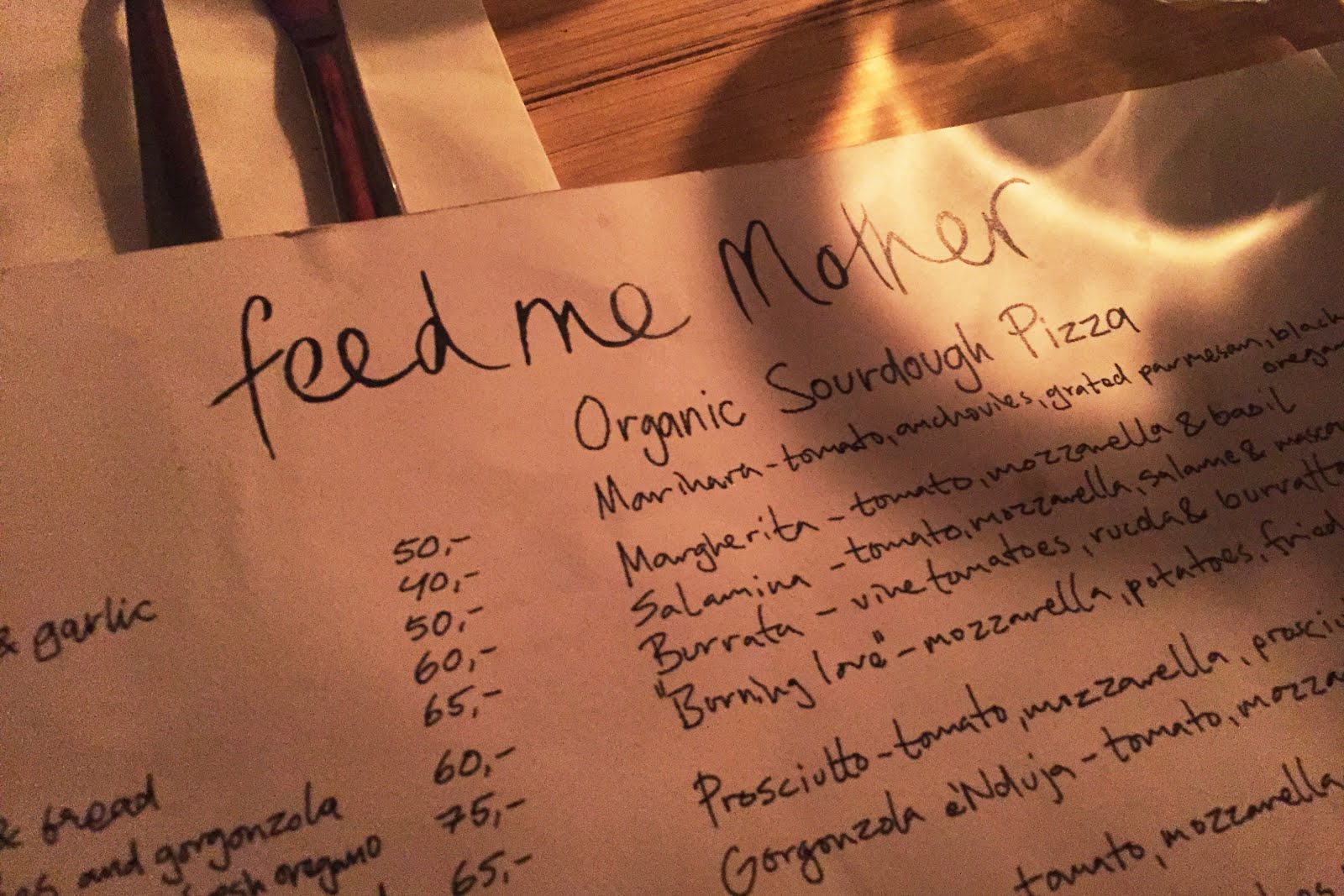 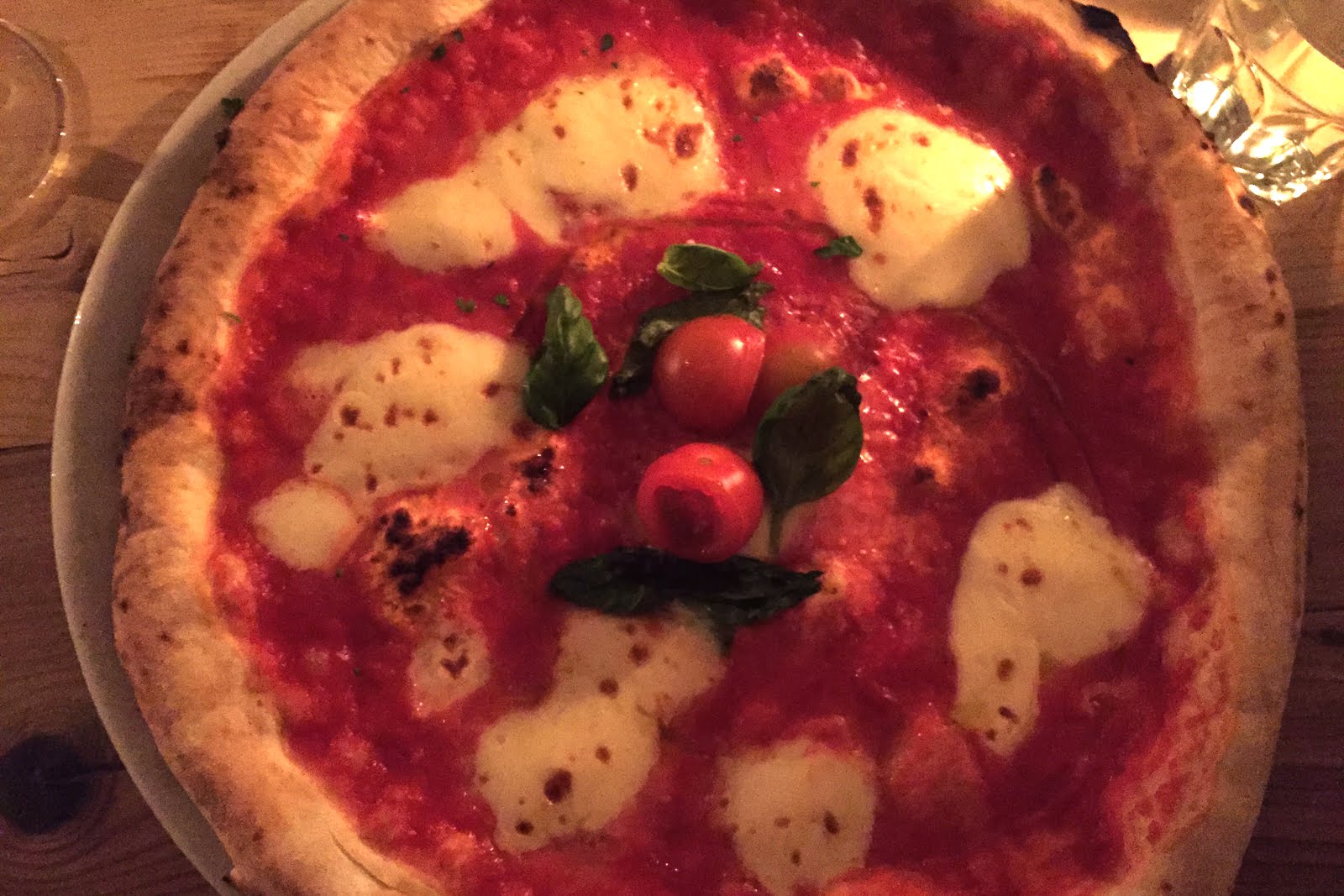 Mother
One of the areas recommended by other bloggers, and our Wallpaper City Guide, was the Meatpacking District in Copenhagen. Having looked around and done a little research, we headed for Mother on Saturday night. We arrived and put our names down on the list. I’d definitely advise booking ahead as the waiting list was over an hour long by the time we arrived, but we used this as an excuse to try out a little bar nearby. The place itself has a little bar on the end, which when we returned we were directed to before being called to our table. The bar is in a separate room with an open arch, and had a live singer performing which all added to the atmosphere. The service was definitely a little more on the relaxed side of things, and the pizzas were really good, a Franco Manca kind of vibe, but the main selling point was really the place itself, with low lighting and late night dining.
Where to stay… 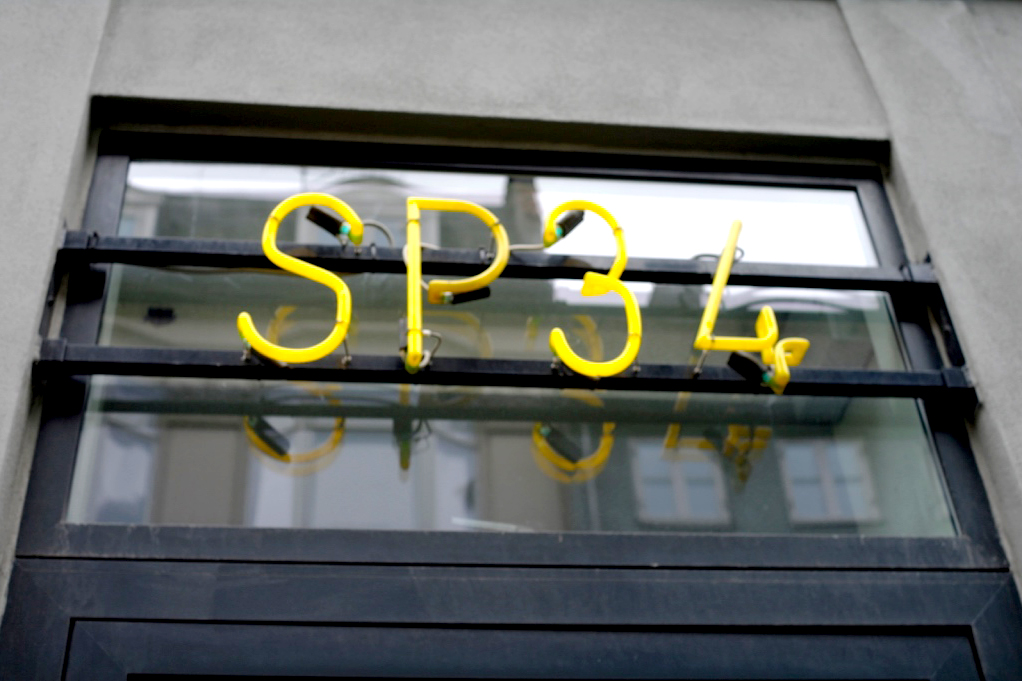 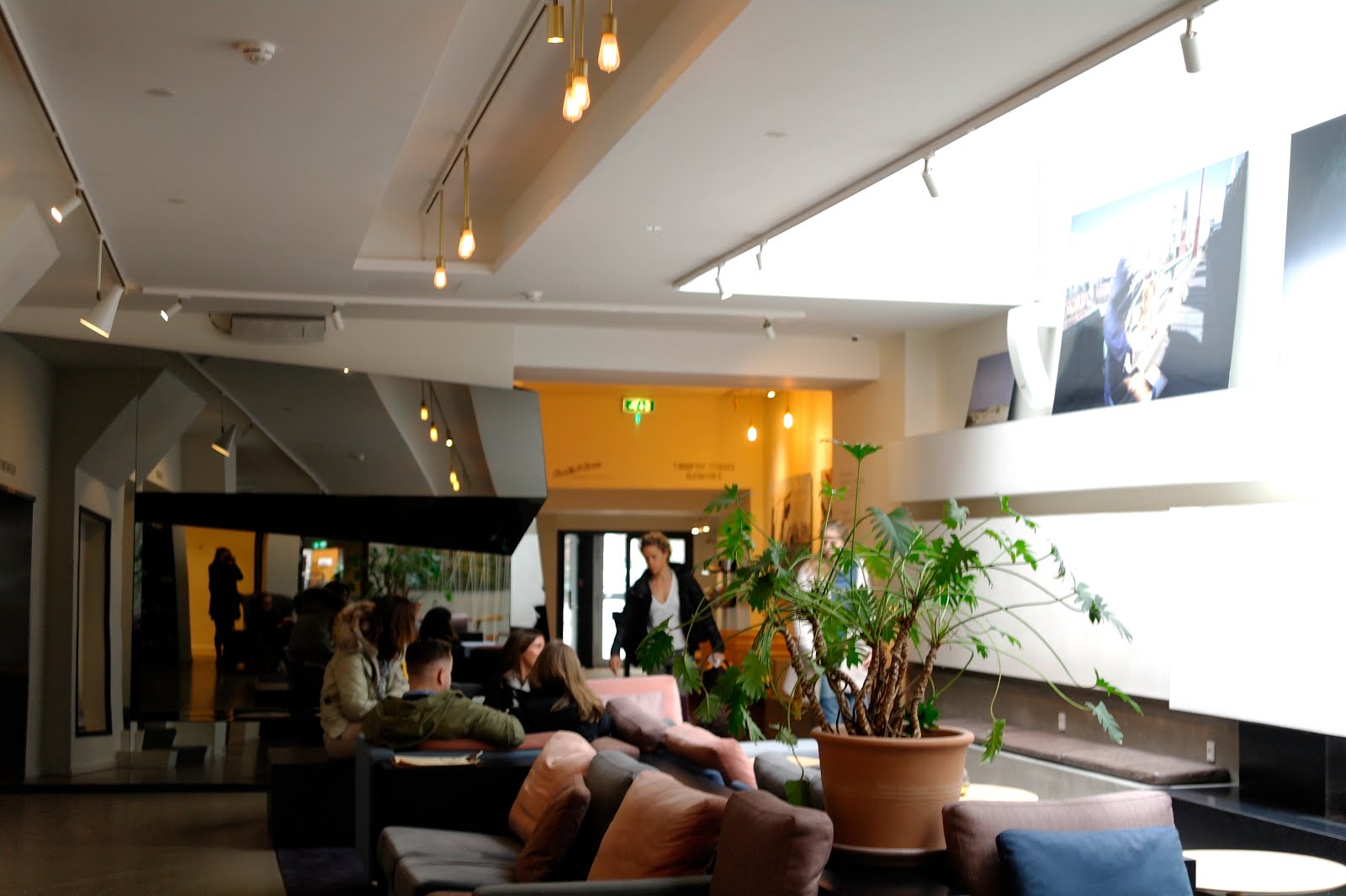 SP34
After the air bnb Simon had chosen for my birthday cancelled on us just a few weeks before our trip, we set off browsing for somewhere to stay. As not many air bnb choices were left, we took a look at hotels too, and in the ended treated ourself to a stay at SP34 after finding a great deal online.

The reception in the hotel is really lovely, and made even better by the hour long happy hour every day from 5-6pm which means wine is completely free. Yep, you heard that right – and it’s the kind of free where the staff encourage you to fit as many glasses in as you can! We had a standard room, which I was a little worried about the size of from a couple of reviews I’d read online, however, it turned out to be just perfect for our stay. It made a nice change to be staying in a hotel rather than an air bnb, with just that little bit of luxury added. I definitely want to return, and try the restaurant out too!

As I said, I can’t wait to return to Copenhagen, Simon even named it his favourite city ever. So if you have any recommendations please let me know!

One thought on “72 hours in Copenhagen | Travel”